New Zealand is well known around the world for its coffee culture, it’s hipsters and it’s flat whites.

But it hasn't always been that way.

Before 1940, New Zealand was pretty much a tea drinking nation, and freshly brewed coffee was largely the preserve of European migrants. The history of coffee in Europe is long, controversial and fraught with adventure, but the story of Kiwi’s and coffee is a refreshing tale of discovery, passion and innovation.

Alfred Fagg established Wellington's “Cuba St” in 1926. Legend has it he would sprinkle coffee beans on the footpath outside his store so the aroma would be released underfoot and bring in customers.

But it was not until the 1940s that coffee really took off. Much of New Zealand's interest in coffee took its cue from Australia, which had larger numbers of Italian and Greek migrants. After the war finished and European immigration to New Zealand began, a family owned store, Browne & Heaton, sold coffee and other imported goods. Beans were roasted on premise and it was observed that exotic foreigners began coming in for their roasted coffee supplies.

Wellington's tea and coffee houses became synonymous with bohemians, who brought a European emphasis on food and hospitality. The social culture involving alcohol and public bars for only men shifted to new tea and coffee houses, where women were welcomed and art was displayed.

Espresso machines made a brief appearance in the 1950s but by the mid-1960s most had fallen into disrepair, and did not reappear again for another 20 years as there was no service or supply available in New Zealand at the time.

Currently, instant coffee accounts for about two-thirds of all coffee consumed in New Zealand, and make it the number one country worldwide for instant brews, per capita.

In the 1980s and 1990s, Kiwis travelled to Australia to buy espresso machines, piquing a brand new interest in coffee. It was still difficult to access equipment from Europe, where Italy dominated all things coffee. A unique community of NZ coffee lovers was developed, inspired by the Italian groups in Melbourne and Sydney.

From the mid-90s Kiwi cafes grew in size and popularity. The term “Antipodean” flavoured coffee was coined from Australia and New Zealand sourcing beans from New Guinea and Indonesia, obviously more accessible and less expensive than European beans.

Kiwis have fully embraced their coffee culture and have a strong affinity for their local café, much like they did their local pubs a few decades ago. They chose to support local roasters over the larger commercial chains such as Starbucks, which never seemed to work in New Zealand until very recently, and began exporting the “Antipodean flavour” overseas.

It has been observed that some of the biggest drivers in coffee culture in recent decades - flat whites, cold brews, hipster baristas – have been created in this beautiful part of the world. 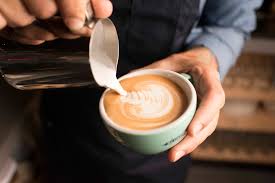 Flat whites are considered the most popular coffee drink in New Zealand.

The exact origins of the flat white remain a mystery with Australia and New Zealand both laying claims to fame on the creamy, milky beverage. Add this to the mix along with Russel Crowe and pavlova for more controversial and polarizing New Zealand/Australia conversation topics.

In New Zealand you will find an extensive coffee menu at any local cafe - short black, long black, short macchiato, americano, long macchiato, flat white, latte, cappuccino, mochaccino, piccolo, affogato, and Vienna are all common espresso drinks. In New Zealand, most drinks are double shot and the variation of the drinks come from the milk (or water) quantities and milk texture.

Without delving into the endless question cup of “who created the flat white”, we can look at New Zealand’s leg up in the competition against Australian espresso drinks.

Second (and this gets a little technical), Kiwis typically use espresso shots in their drinks (such as flat whites), but Aussies typically use ristretto shots. A classic espresso shot is pulled for a few seconds longer than a ristretto, resulting in 50 percent more volume. That means that a Kiwi flat white will have a substantially more intense, robust, caffeinated flavour. Kiwis and Aussies might source and roast their beans in similar ways, but Kiwis are really squeezing out each bean’s true potential. It’s a distinction that might seem didactic, but for coffee nuts it’s everything.

Who invented the flat white is not nearly as important as the incredible story behind both New Zealand and Australia both being front seat drivers in the modern global coffee culture.