The plunger, or French press, coffee device is well recognised throughout the world. Everyone has one, knows someone with one or has seen one.

Its popularity comes from its ability to make a rich, delicious brew easily and relatively quickly. No electricity is required to make a pot of plunger coffee, meaning it is often seen on camping trips and outdoor activities. The design is simple and being able to make a delicious carafe of piping hot coffee to share on the breakfast table, much like a big teapot, makes it representative of shared coffee experiences.

It is an ‘Immersion Method' style of coffee brewing, where hot water is poured over ground coffee in a vessel and allowed to brew for a time. Then, metal or cloth screen is pushed down over the mix using a central metal rod, leaving the brewed coffee separate from the coffee grounds. 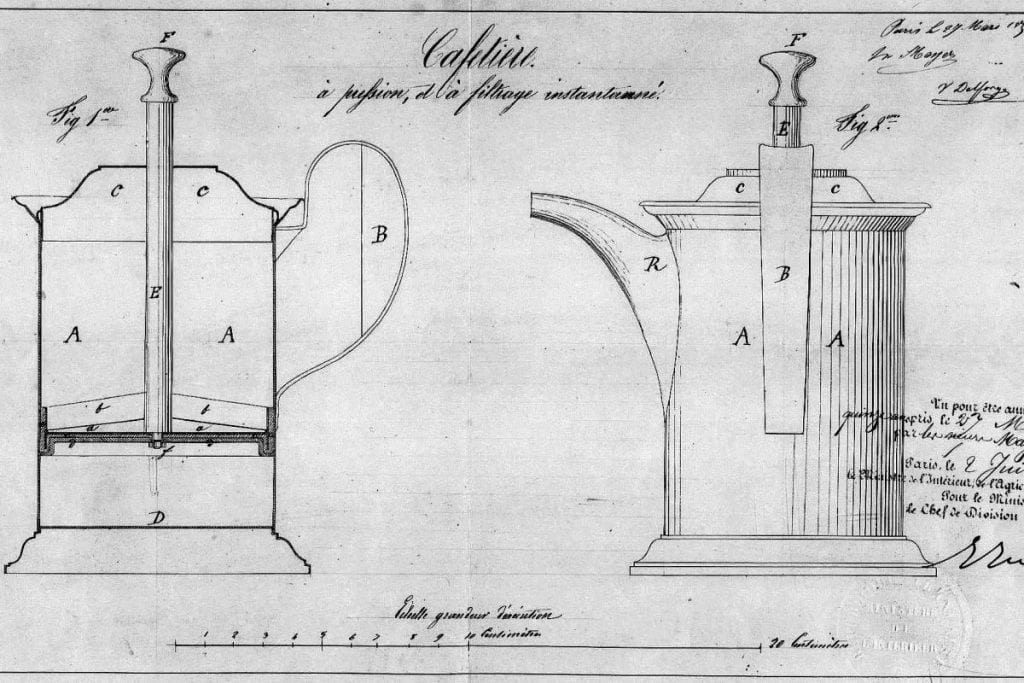 In the 1850s a Frenchman was wandering the fields and started making his daily cup of coffee brewed over a hot fire (back then, ground coffee was boiled over heat and then poured into a drinking vessel). When he realised he had forgotten to put the grounded coffee into his pot he threw it in.

Unfortunately (or fortunately) for this Frenchman, he was on his last batch of ground coffee so looked for a way to save the coffee grounds so he could re-use them.

Enter the timely wandering of an Italian merchant (see, the Italians were involved even back in the legend part of things), who sold the Frenchman a metal screen that they used to press down on the hot coffee mix in the pot using a stick as a sort of experiment. The screen pushed the grounds down and left just the coffee liquid to be poured off.

Both were expecting disaster, but instead found the resulting coffee to be the best they had tasted!

In 1852, Mayer and Delforge (both Frenchmen) made a rudimentary design of the French Press and patented it.

Later, in 1928, Calimani and Moneta (both Italians) registered a new patent on a design that represents the basis of the French Press we see today. It was characterised by :

“vessel adapted to contain a liquid, ie water whereinto substance to be infused, as for instance coffee in powdered form is poured with a slidable filtering member having a fit sufficiently tight within said vessel in such a manner that, causing by suitable means the said member to slide towards the bottom of the vessel the infusion will be rapidly filtered to get it ready for use.”

In 1958, Bondanini (Italian), patented his revised version of the French Press which was further classified as

“Apparatus in which ground coffee or tea-leaves are immersed in the hot liquid in the beverage container having immersible, e.g. rotatable, filters”.

Bondanini’s patent was produced and distributed by a French company Martin S.A. under the name Chambord.

In the early 1960s a British investor, Louis James de Viel Castel, had holdings in not only Martin S.A. but also the British company, Household Articles Ltd. Household Articles created a very similar model to the Chambord which they called the La Cafetiere. Martin S.A. also purchased this British design in the 1960s.

In 1991, a Danish company, Bodum Holdings, purchased both the Chambord and the La Cafetiere designs from Martin S.A. and the most popular French Press brand, Bodum, was born.

Being an immersion style coffee brew, the French Press generally calls for a coarse grind, much finer than an espresso grind. Anything too fine will just not work with the immersion method as the grinds will come through the mesh. But this doesn’t limit you to just one style of coffee brewing.

The standard French Press brewing method required a coarse grind (freshly ground at home is the best way to optimize the flavor).

If you prefer an espresso style, you can play around with your grind consistency, and if you grind it fine, but NOT TOO FINE, you can create an espresso style of coffee using the traditional French Press. Just be sure the grinds are not so fine as they make it through the mesh.

Here’s how to do it…

After you make the brew and decant it, you can clean out your press and use it to froth milk to make a café style flat white or latte. A wonderful method you can use at home to get a smooth, delicious milk coffee.

Here’s how you do it…

Cold brew is one of my favourite ways to brew at home. I love it because it is like the coffee version of the Slow Food Movement. You can prepare your brew with lovely interesting flavours and then let it sit, drawing out the brew using time rather than heat.

A great alternative for those who have sensitive stomachs as this brewing method creates a less acidic brew than heat brewed styles.

African single origins seem to work the best with a cold brew batch, however, any good specialty coffee will do the trick. Just remember organic and fresh are at the top of your list when it comes to any home brewing.

Here’s how you do it…

You can use it as a cold refreshing drink with lemon, lime, and more mint poured over ice, or as a base for a coffee of your choice.

I like to blend the cold brew with some almond milk in a saucepan for a warm, smooth morning drink. It works well with decaf also!

There you have it, time to dig out your French Press and get creative! Enjoy!