Colombia, officially the Republic of Colombia, is a country in South America. It is bordered by the Caribbean Sea to the north, Venezuela to the east, Brazil to the southeast, Ecuador and Peru to the south, the Pacific Ocean to the west, and Panama to the northwest.

Why is Colombian Coffee Great?

The richness of flavour for which Colombian coffee is celebrated is mainly due to an excellent climate, perfect soil and the exact right amount of rainfall. Coffee thrives in places with at least 200 centimetres of rainfall per year, as well as in locations where the temperature never falls below freezing. Colombia provides all these conditions and does not fail to produce excellent coffee beans year after year.

Central Cooperativa Indígena del Cauca (CENCOIC) is a coffee producer organisation founded in 1980 as the commercial arm of the indigenous movement in Cauca, Colombia (Regional Indigenous Council of Cauca).

The organisation became Fair Trade certified in 1995 and since 2006, it has used its Fair Trade status to reduce the gap between the dominant multi-national roasters and small coffee producers.

The Cauca region used to be very different place to what it is now – years of armed conflict have given way thanks to all the hard work of the Colombian people and the Government resulting in an area that is now much more stable and the process towards peace is allowing CENCOIC to flourish. The group have seen steady growth over the recent years as more and more families from farming communities in their native geographical reserves are producing the right quality for export. They are also working with new reserves in the region which they previously found were inaccessible due to the geo-political situation and unstable and inherent dangers associated with said areas.

The typical farmer in the cooperative has around 1 hectare of coffee growing land at an average altitude of around 1800masl. Common varieties include: Caturra, Colombia, Tabi and to a lesser degree, Castillo. Coffees across all the reserves are de-pulped, fermented and dried at the farm. The farmers deliver their parchment to the local collection warehouse where it is weighed and recorded before being received in to the warehouse in Popayan to be cupped and then dry milled for export at a mill in Popayan before being trucked to the port of Buenaventura. 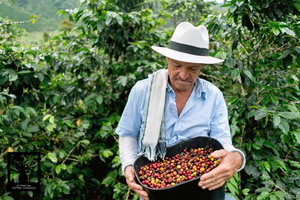 A Taste of Colombia

Try our stunning new season, new variety single origin has been produced with the support of the CENCOIC organisation in Colombia.

It is an excelso quality, limited, Fairtrade organic single origin bean and has spectacular tasting reviews.