The region of Sidama is in southern Ethiopia. It encompasses many individual origins including the area of Yirgacheffe. However, Yirgacheffe is classified as its own separate origin. 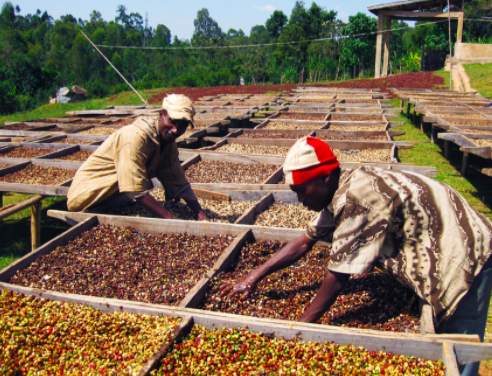 Sidama features an extraordinarily wide variety of coffee flavours. Many different grades of washed and unwashed coffees are produced and there can be striking differences from town to town.

Varying soil types, microclimates, and especially the countless heirloom coffee tree varietals make for a kaleidoscope of different flavours. It is difficult to make any single description of Sidama coffee, without immediately encountering another coffee that fits a completely different profile. The strength of Sidama coffee lies in its variety.

An excellent feature of Sidama coffee is its profound complexity. This derives from the many different heirloom varietals. Many different farmers and pickers, each with a very small patch of land, often with their unique varietals, will pool their coffees at a cooperative. The resulting "blend" is a unique expression of the complexity of the horticulture in the surrounding area.

Another striking characteristic of Sidama coffees is that even the washed coffees often retain a salient fruity characteristic while having much more clarity and brightness than their unwashed counterparts.

Excellent coffees of many different profiles can be found in all corners of Sidama.

Nearly all coffee produced by our member cooperatives is shade-grown in low densities under the canopies of indigenous trees and enset, a staple food crop.

Members of SCFCU have been growing and processing Sidama type coffee for more than 35 years, and are now exporting high-quality traceable coffee directly to overseas buyers. Fair Trade Certified by Fair Trade Labeling Organizations (FLO) since 2003, Sidama Union produces approximately about 10,000 tons of high-quality Organic Arabica beans per year, 95% of which is washed.

Geography and Culture of Sidama

The coffee-growing regions of Sidama lie within the famous Great Rift Valley that runs through Ethiopia and Kenya. The countryside is generally lush and green. Though mostly rural, this part of Ethiopia is very densely populated nonetheless.

Several large fresh-water lakes dot the terrain, running in a long chain through the valley where most of the coffee grows.

The biggest town in the area is Hawassa, which has been growing extraordinarily fast in recent years, with modern style hotels and restaurants having been recently constructed. Other major hubs are Yirg Alem and Dilla, close to Awassa; and Agere Maryam further south.

Ethiopian Orthodox Christianity is a major religion here, and the dominant tribes are the Sidama and the Oromo, though there are many other tribes present as well. Amharic and Sidaminya are the most widely spoken languages, with Orominya common, and English somewhat widespread.